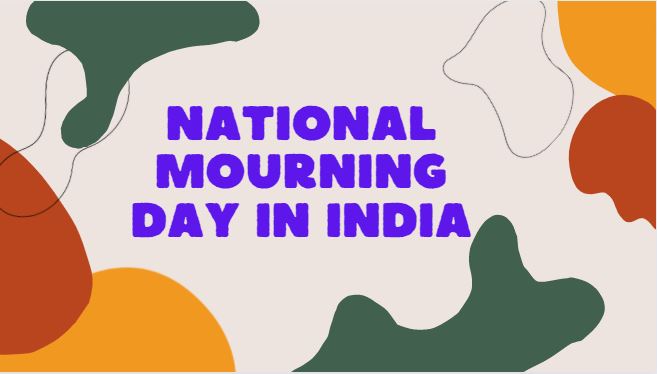 In India, National mourning means that, The Government of India will observe the mourning on behalf of it, It is observed when top government heads such as President, Prime Minister or Chief Minister demises.

Not only government heads but also persons of exemplary service to the nation’s death also observed as national mourning ex. death of Gandhi ji. In this case the President of India decides and passes order to observe national mourning.

One of the important feature of national mourning is National Flag through out the country will be lowered to half mast.

Hosting the flag on half mast is symbolic representation of mourning given to the particular person on behalf of the nation.

In case of state leader, holiday is observed in the particular state. Other states also extends holiday to their states based on their interest. However in case of National leader Holiday is given to through out India.

Cancellation of Government Functions and Celebrations

During a national mourning any small to big function or celebration stands cancelled.

Effect of such declaration

National flag: On the day of mourning in India, the National Flag will be flown at half-mast throughout the country and in Indian missions abroad,
Restriction on ceremonies and official entertainment: No ceremonial functions will be organised and there shall be no official entertainment during the period of state mourning. Memorial activities are often organised by people.
State funeral accorded with due respect to the dignitary.
Half day holiday in Central government and its institution: A 1997 Central government notification that restricts declaration of public holiday only in the event of death of the sitting Prime Minister or President.
On people: time to think and contemplate over the contributions and values espoused by the dignitary.
This ans is a humble tribute to late. Atal Bihari Vajpayee who expired today on 16th August 2018. He was a true statesman, a rare species these days! To quote him.

Observing or declaring a national mourning day is a symbolic gesture to pay tribute and express grief for a national tragedy.

Such days include those marking the death or funeral of a renowned individual or individuals from that country or elsewhere, or the anniversary of such a death or deaths.

It is designated by the national government.

After Mourning is declared by Ministry of Home Affairs following restrictions are observed in all central Institutions/organaisations/offices.

“Governments will come and go, but this nation should stand tall”

A national day of mourning is a day or days marked by mourning and memorial activities observed among the majority of a country’s populace. They are designated by the national government. Such days include those marking the death or funeral of a renowned individual or individuals from that country or elsewhere or the anniversary of such a death or deaths, the anniversaries of a significant natural or man-made disaster occurring either in the country or another country, wartime commemorations or in memory of the victims of a terrorist attack. Flying a national or military flag of that country at half-staff is a common symbol.