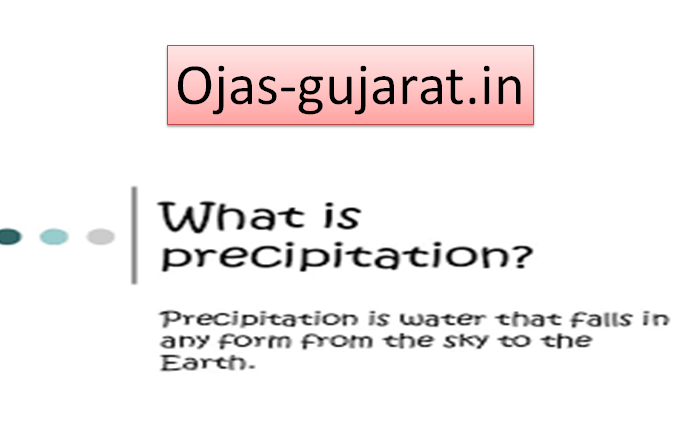 What is precipitation: Precipitation is any liquid or frozen water that forms in the atmosphere and falls back to the Earth. It comes in many forms, like rain, sleet, and snow. Along with evaporation and condensation, precipitation is one of the three major parts of the global water cycle.

Precipitation forms in the clouds when water vapor condenses into bigger and bigger droplets of water. When the drops are heavy enough, they fall to the Earth. If a cloud is colder, like it would be at higher altitudes, the water droplets may freeze to form ice. These ice crystals then fall to the Earth as snow, hail, or rain, depending on the temperature within the cloud and at the Earth’s surface. Most rain actually begins as snow high in the clouds. As the snowflakes fall through warmer air, they become raindrops.

Particles of dust or smoke in the atmosphere are essential for precipitation. These particles, called “condensation nuclei,” provide a surface for water vapor to condense upon. This helps water droplets gather together and become large enough to fall to the Earth.

A common misconception is that when raindrops fall, they have a teardrop shape. In fact, smaller raindrops (ones that are approximately 1 millimeter (0.039 inches) across) are almost perfectly spherical. Larger raindrops (2–3 millimeters (.078-.118 inches) across) are also round, but with a small indent on their bottom side. They look more like kidney beans when falling to the Earth. Very large rain drops (larger than 4.5 millimeters (.177 inches)) have a huge indent and look more like a parachute. These extra-large drops usually end up splitting into two smaller droplets. The indents on raindrops are caused by air resistance.

Precipitation is always fresh water, even when the water originated from the ocean. This is because sea salt does not evaporate with water. However, in some cases, pollutants in the atmosphere can contaminate water droplets before they fall to the Earth. The precipitation that results from this is called acid rain. Acid rain does not harm humans directly, but it can make lakes and streams more acidic. This harms aquatic ecosystems because plants and animals often cannot adapt to the acidity.

What are 4 types of precipitation?

The different types of precipitation are:

Water is an essential ingredient to life on Earth. In its three phases (solid, liquid, and gas), water continuously cycles within the Earth and atmosphere to create significant parts of our planet’s climate system, such as clouds, rivers, vegetation, oceans, and glaciers. Precipitation is a part of the water cycle, where water particles fall from clouds in the form of rain, sleet, snow, ice crystals, and/or hail.

So how does precipitation form? As water on Earth’s surface evaporates it changes from liquid to gas and rises into the atmosphere. Because air cools as altitude increases, the vapor rises to a point in the atmosphere where it cools enough to condense into liquid water or freeze into ice, which forms a cloud. Water vapor continues to condense and stick to other water droplets in the cloud until the weight of the accumulated water becomes too heavy for the cloud to hold. If the air in the cloud is above freezing (0°C or 32°F), the water falls to the Earth as rain.

If the air in the cloud is below freezing, ice crystals form and it snows if the air between the cloud and the ground stays below 0°C (32°F). If a snowflake falls through a warmer part of a cloud, it can get coated in water, then refrozen multiple times as it circulates around the cloud. This forms heavy pellets of ice, called hail, that can fall from the sky at speeds estimated between 14 and 116 kmph (9 and 72 mph) depending on its size. A hailstone can range from the size of a pea (~0.6 cm or 0.25 inches) to a golf ball (~4.5 cm or 1.75 inches), and sometimes even reach the size of a softball (~10 cm or 4 inches).

Precipitation doesn’t fall in the same amounts throughout the world. The presence of mountains, global winds, and the unequal distribution of land and sea cause some parts of the world to receive greater amounts of precipitation compared with others. Areas with rising moist air generally indicate regions with high precipitation. According to the Köppen Climate Classification System, tropical wet and tropical monsoon climates receive annual precipitation of 150 cm (59 inches) or greater. Tropical wet regions, where rain occurs year-round, are found near the equator in central Africa, the Amazon rainforest, and southern India.

Monsoons are storms with large patterns of wind and heavy rain that can span over a continent. Tropical monsoon climates are located mainly in Southeast Asia and areas around the Pacific Ocean, where annual rainfall is equal to or greater than areas with a tropical wet climate. Here, intense monsoon rains fall during the three hottest months of the year, which are usually between June and October. Snow and ice, which are most common in high altitudes and latitudes, cover most of the Earth’s polar regions. High altitude regions of the Andes, Tibetan Plateau, and the Rocky Mountains maintain some amount of snow cover year-round.

Over the next century, it is predicted warming global temperatures will increase the temperature of the ocean and increase the speed of the water cycle. With a quicker rate of evaporation, there will be more water in the atmosphere allowing clouds to produce heavier precipitation and more intense storms. Although storms would be more intense in wetter regions, increased evaporation could also lead to extreme drought in drier areas of the world. This would greatly affect farmers who grow crops in dry locations like Southern California or Kansas.

This map layer shows Earth’s mean precipitation (measured in centimeters per month) averaged from 1981-2010 as calculated by the Copernicus Climate Change Service. The data was collected from the Copernicus satellite and validated with precipitation measurements from weather stations. Scientists averaged all of the amounts (originally collected in meters) occurring each month together, then they calculated the average of each month over 30 years to create this map.